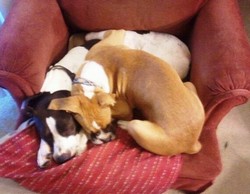 We’ve had the adorable Whiskey River for three weeks now, but it feels like he’s always been here. Whiskey was a scared little guy on the day of the adoption event we attended, hiding between his foster mom’s legs and looking terribly forlorn. My wife headed straight for the shy guy in need of nurture and protection. The “before” pictures of Whiskey that we were later given – obvious neglect and abuse, severe demodex mange – showed why he felt so threatened.

We sat with Whiskey for a couple of hours, and eventually he let us pet him and even pick him up. And then there was no putting him down. I had thought about changing his name to “Hermann,” for a favorite author (Hermann Hesse); but “Whiskey River” just stuck.

He’s a gem of a dog. He’s still fearful around strangers, but is bonding beautifully with his brother Hugo (our German Shorthaired Pointer) and beginning to have more confidence out of the house. Whiskey has been exactly what we needed – a sweet, cuddly, and affectionate dog to his
parents, and also a good playmate to his high-energy brother. We’ve decided that setting a nub wagging counts as a good deed for the day.

All thanks to Austin Boxer Rescue for taking in and taking care of this little guy, and helping us get matched with him.