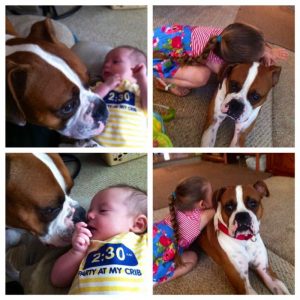 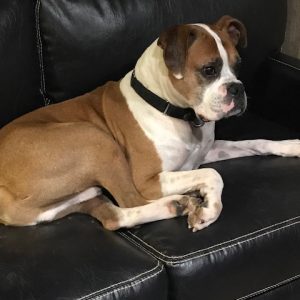 Vlad has given, me especially, amazing companionship. He has been our protector, playmate to the grandkids, travel buddy, it hard to believe Vlad’s only been with us 6 years.

Last month Vlad was Diagnosed with stage 4 metastatic bone cancer.   Being a nurse I’m not putting him through a miserable treatment to extend his life for me. Because I know how sick it will make him.  So we are keeping him comfortable and happy.  Extreme attention, favorite foods ( yes even human, I know but…) yup he is getting away with, most anything.

He’ll let us know when it’s time to say goodbye. We never had a Boxer as a member of our family before Vlad. Now we know we’ll be lost once he is gone,  especially me.

I do think Vlad’s story would be a great one to pass on.  He was picked up by the Ft. Hood animal control. I was to transport him and a little puppy mill female. I knew when I saw him skinny, with one bad eye but so friendly, he needed to come home with me.  Three weeks later Vlad got really sick, the Vet said it was Parvo.  He had been tested at adoption and was supposed to have been negative. 6 weeks of medication, IV fluids (I said I was a nurse right) and sitting up with him at night, we walked back into the vet for his Parvo Booster. The Vet was amazed. As he petted and played with Vlad he told him “I never expected to see you again.”  Then looked up at me and said He had it bad and really didn’t expect him to make it.  The vet said they charge thousands of dollars to do what I did for Vlad and still the dogs/puppies die.  He said we must be meant for each other.  Vlad has been attached to me and me to him ever since. That 35 lb. skinny 9 month old is now 80lbs of muscle,  gorgeous and jumps like a Jack Russell. We took training classes and we both know all the basic commands and a few nice ticks. My favorite is when he bows for a treat.  I can’t take him anywhere without someone commenting on his playful, friendly, handsomeness.

I wish his story would last another 6-7 years, but we will enjoy whatever time we have left.

I know there won’t ever be another Vlad.  But maybe there’s another sweet boy or girl waiting for a loving forever home that we can offer, for both of us