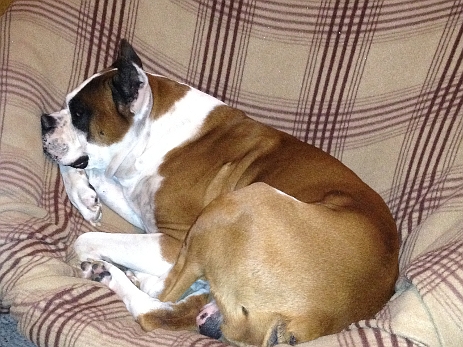 On Oct 7th 2012, our beloved Spencer crossed over the Rainbow Bridge. We had rescued him while on a trip to Miami, FL. He rode in the back of my car all the way back to Dallas, TX. We didn’t know what our ABR Alumni Zoe AKA Kari was going to think about him but it was too late for that. They became fast friends and he actually became her hearing aid so if he moved she was right there. We had him for 3 1/2 years and was taken from us too soon. We did not know that he had a mass on his spline the size of a grapefruit and had pushed his insides forward. After getting 2 opinions from 2 different vets, they felt it was best to lay him to rest. He was 9 years old but didn’t act a day over 2 and there isn’t a day that goes by we don’t think about him and the emptiness we have in our home and hearts. We love and miss you Spencer Roo.
Michael and Heather Govantes