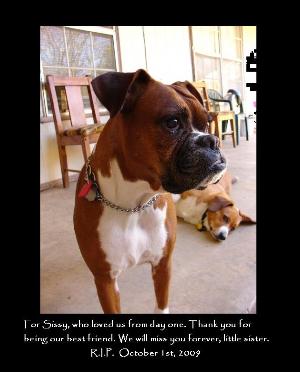 This is Sissy, who passed away in October. She is the reason I wanted to become a foster. She came to live with us back in March of 2002 when my daugher was 3, and I was a single mom, living in Ft. Worth and going to school. She was a stray who was picked up by one of my coworkers and as soon as I saw her, I feel in love! She’d had puppies, but we never got to see any other them. She loved me and my daughter, Kiahna, SO MUCH from day one – she was a great “mama” to Kiahna! She protected us and made us feel safe everyday. She never did like other dogs much, in fact, the first time I took her to the park she got out of her collar and attacked a puppy that was running in the park~!!! Later, when I met my husband, he already had a dog of his own (Jake – who is in the picture with her in the background), so Sissy had to learn to live with him. They fought from time to time, but eventually became best friends. She also learned to tolerate many other animals that we’ve had over the years, and eventually got to have a “baby” all her own (Phoenix). She was the best dog in the world, and I miss her everyday. Hoover reminded me so much of her. That’s also why I have such a crush on Armani – his face is so much like hers was! What can I say…I’m a sucker for a squishy face!
Anyway, I’ve just been thinking about her a lot and missing her. I have really enjoyed fostering so much, and it has helped me grieve and heal. Every foster we have has been compared to Sissy, and they all remind me of her in some way. I feel like I am getting a second chance to do all the things I wish I’d done with Sissy when she was alive. I’ll never take another pet for granted, that’s for sure!