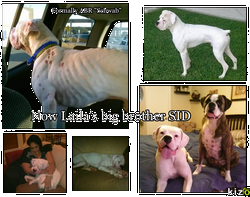 We moved to the Austin area in the fall of 2011 years ago with our 2 yr. old female boxer, Laila. We heard about ABR Austin Boxer Rescue from someone at the dog park in Round Rock. So I decided to attend an adoption day event. There were so many beautiful boxers, all who were in desperate need of a home. I noticed one white boxer that NOBODY was visiting with off to one side. He had demodex mange, ringworm and was so thin and emaciated, he looked horrible. I felt sorry for him so I decided to go visit with him since everybody else there was ignoring him.

I approached with caution since his skin looked awful until his handler informed me that he was not contagious. I honestly had just planned on saying “hi” and moving on the “cute” boxers. When I bent down to say hi, “Schwab” ever so gently came up on his hind legs and came in for a hug. Even though his had skin infections, his fur was as so soft. He didn’t jump, didn’t lick, wasn’t aggressive .. he just wanted a hug. My heart melted. I left adoption day without a boxer that day, took some pics and decided to sleep on it.

“Schwab” never left my thoughts. When my boyfriend moved down a few weeks later, I told him about the lonely, sick boxer I had met and begged him to come meet him. He met him and fell in love. We decided to foster “Schwab” for a while since he had medical needs and ABR provided all the funding for his treatments. That didn’t last long. We decided not to foster anymore, we wanted him in our family forever. We changed his name to SID and now two years later, we can’t imagine our lives without him. SID and his fur sister Laila love each other, we couldn’t ask for a better pair. We are so grateful to ABR for allowing us to bring SID into our family.

Thank you from the bottom of our hearts!