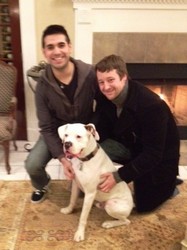 Samson is doing great! He’s such a sweetheart. We have almost mastered the house training. I think the holidays got him off track a little, but we are getting back into the routine of things. He has learned to bark at the back door when he needs to go out. He has developed a love for water! He drinks a lot of it, and he loves baths. He also really loved the ice on the ground- he was so funny hopping around like a bunny rabbit and licking everything. Samson had a great first Christmas. He got to meet all of the family, and he got lots of yummy treats and toys for Christmas. He tried to get my in-laws’ Shit-zu to play, but she is a bit snobbish. So, he ended up playing with my husband’s nieces and nephew, instead (and of course Seven!).