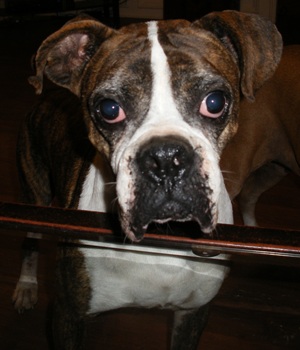 In August of 2011, I was going through a difficult time in my life. The one beautiful, positive thing that I held onto on a daily basis was my work with Austin Boxer Rescue. I had lots of foster dogs running around my house and they made me smile no matter what else was going on. When I got a call asking me to meet a transporter and give a new dog a place to stay overnight, I immediately agreed. After all, what is one more dog for a night, right?

I met the transporter and the moment I saw this boy, I knew he would not be a one-nighter. He was so skinny, his hair was falling out, he had bumps and scabs all over his skin. I had to help him. I called the rescue to offer to foster him and asked if I could give him his ABR name. I settled on Pumpsie, after Pumpsie Green, a former Red Sox player.

At one time, someone loved Pumpsie but more recently, he had clearly had a rough go of things. He was very malnourished and it took us a few months of some very unpleasant stomach issues to get him to a healthy weight and “regular” digestive routine. Pumpsie was no spring chicken, and ABR soon placed him in the Silver Hearts program. He was just looking for a place to live out his later years and know love.

As the months wore on, Pumpsie’s spirit began to shine throughout my home. He got along with every dog I brought home. When one of his siblings was healing from a vet visit, a spay/neuter surgery or a bad bout with kennel cough, Pumpsie was there for comfort. Pumpsie’s favorites were the young boxer girls I would bring home. He LOVED to play or nap with them. I would jokingly call him “Pimpsie” when he’d curl up on a dog bed with two of his ladies.

I officially adopted Pumpsie in April of 2012, but I realize today that he adopted me the day I met that transporter. I needed him, and he knew it.

Pumpsie was an attention hog…if another dog was getting pet, he would muscle that dog out of the way so he could get his. He was always smiling and he had a special dance he did when he was super happy (which was most of the time). I would sing to him about his “Pumpsie Dance” to the tune of Digital Underground’s Humpty Dance, and he would smile and dance along.

Pumpsie taught me more than I can put into words. Pumpsie taught me that having a senior dog is essential to our household. He showed me that loving an older dog is more rewarding than anything on this earth. He showed me that when the time came to let go, I would know it with every fiber of my being. He taught me that even though it hurt to let go, I would have peace and be surrounded in love and joy despite the tears. On July 31st, I got a call from my husband that something wasn’t right with Pumpsie. I met them at the vet’s office about an hour later and the moment the car door opened and I saw Pumpsie, I knew it was his time. The only gift I could give to Pumpsie that came close to what he gave me in the three years I knew him was the gift of peace that day.

I still sing to him. I feel him in our house and I know he’s always with us. The day we said goodbye, I went for a run and I felt him running with me. He was free. That day, I had the best run I’d had in my life, and it changed my world forever. I used to hate running, but now I run almost every day and I love it. Pumpsie took a little piece of me with him the day he died, but the hole he filled in my life was so much deeper and more pronounced and I am forever grateful to have had the chance to love him.

I love you Pumpsie…and I can’t wait until we meet again.