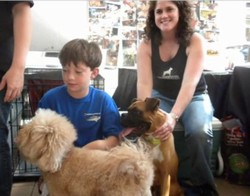 Hello, Austin Boxer Rescue!
Just wanted to let you know that “Ares” is doing well in our home. We all love him! He is getting along with the whole family and has probably never had so many people truly waiting in line to love on him. The kids got up early today so they could play with him before school and they even gave up their 15 minutes of tv time after school to play with him outside instead. Both of them wrote about their new “brother” in their journals at school and have already drawn several pictures of him. Our current dog, “Penny”, is enjoying having him around, too. She is eager to play. He is a bit unsure of what to think of her and doesn’t seem to have a clue as to what to do with toys, balls, etc., but I’m sure he’ll learn quickly. He’s been great in the house….no accidents, and has been great with our friends who have come to meet him.

A video of our newest addition, “Patriot” is featured at the top of the ABR success stories page. Mackey and I met him at Dogtoberfest in Austin yesterday and adopted him from Austin Boxer Rescue. Mackey picked the name, which I wasn’t wild about in the beginning, but he told me he picked it because The Patriot is one of his favorite movies and it’s about the Revolutionary War and this dog has kind of been in a war and he won by coming to live with us. I couldn’t argue with that, so “Patriot” it is…..plus it sounds kinda cute with “Penny”. : )