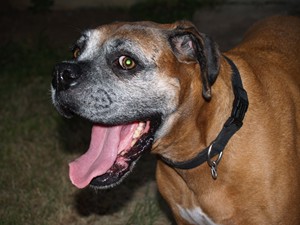 I first met Oscar several years ago when I went to Houston to meet dogs at Lone Star Boxer Rescue. I had intended to adopt a dog close to the age of my other two boxers, both of whom were under two at the time. However, soon after we all arrived, we saw a boy rolling around with his back on the ground, swinging a rope in his mouth. It turned out that this boy, Oscar, was 6-years-old and had only three strong legs to walk on, due to an old accident that kept him from walking with his fourth on the ground. It didn’t matter – he had energy – lot’s of exuberant, yet peaceful energy. Oscar lived with my family for over 6 more years. Early in 2008, he suddenly became very sick and it was soon decided that it was his time to rest. Incredibly, his first family contacted Lone Star just three days before he passed away, wondering how he had been doing since he had left their home. We were able to share memories of the two halves of his life. Oscar was an amazing dog, who even into his 12th year could outrun the others across the yard and displayed all of those beloved boxer traits – the full-bodied kidney bean wag, the post-drink slobber kiss, the dream-awakening snore, the gas assault, the squeaky toy love, and the forever puppiness. We miss you Osk. You know I have a couple of corny songs dedicated just to you. Meredith, Lucy, and Plato send out a big wet kiss. Every morning you still bathe in the sun and every night you still sleep with us. Lucy and Plato try to wrestle over your place. Silly kids. – Marlena