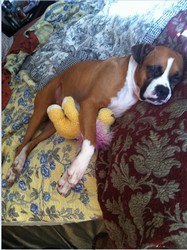 Update on Sideburn (ABR name), now known as “Oakley.” After losing our old friend Buster (a boxer) to a degenerative condition last fall and missing him terribly for a few months, we decided that our little girl Berkeley (also a boxer) needed a new friend. We made a couple of
visits to ABR’s great adoption days, after which we had zero doubt on the need to adopt rescue over searching for a puppy.
In our search, we found ‘The Oakster’ on the ABR website. He was shown as a young flashy fawn male with no other description, few pictures. We inquired and found that he’d been picked up as a stray in San Antonio and had spent almost two months after his discovery at a veterinary kennel in Belton. We took a drive and met the sweetest
young guy who couldn’t have been more than 18 months in age. VERY friendly and bright-eyed but quiet with huge brown eyes and a boxer-puppy-like curiosity, although He didn’t play with toys and he didn’t bark. We took him home and he immediately bonded with Berkeley, his new sister. She took to him immediately as well. Oakley also visits frequently with our sons boxer boy, Rocky. Oakley looks up to him like a big brother, emulating everything Rocky does.

Oakley was very-well house trained, non-possessive of food and loved to find comfort laying next to Berkeley and two-legged family members at every opportunity. Although not leash-trained, he’s not a “puller” and loves outings; he’s headed to a fenced dog park today to get some prolonged high energy interaction.

In the last couple of weeks he’s built new skills, playing with toys and letting out the occasional isolated bark when he’s excited. He looks forward to bedtime nightly and steadfastly sleeps through the night. He’s loves his twice-a-day mealtimes and has gained a couple of pounds since his arrival.

In summary, he settled in immediately. We hope he’s as happy with us as we are with him. Please move Oakley’s info to sit alongside the phenomenal success stories ABR has compiled to date. You have another winner in The Boxer Formerly Known as Sideburn!

Best regards and thanks,