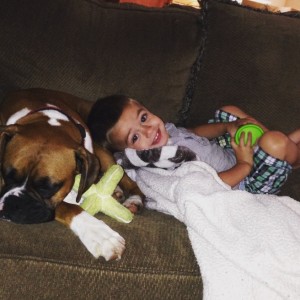 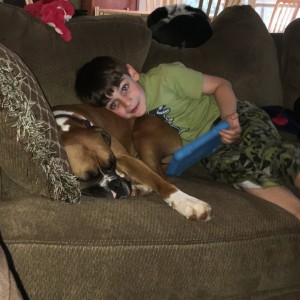 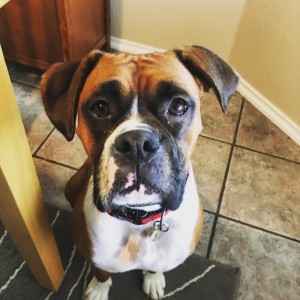 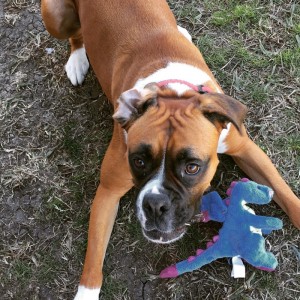 Minnie (ABR Alum Mini Me) came to us as foster in March of 2015. When we met her she was skinny and hesitant, but just as sweet as can be. Our two little dogs essentially picked her for us as she was the only Boxer of the bunch that we met that they didn’t react to. We fostered her for almost 3 months before we decided that she just had to stay. She has come such a long way from the somewhat shy girl that we first met in March. She no longer hangs her head low and she’s regained her jubilant Boxer spirit that Boxer owners all know and love. She is my Velcro dog, as she doesn’t really leave my side and she does not like it when I leave hers, but slowly she’s getting over that. Our two boys ages 6 and 2 absolutely adore Minnie with my oldest proudly declaring that he rescued her from the “Boxer rescue group” everywhere we go. Minnie is also my 2 year old’s shadow and follows him diligently around the yard. We’re not sure if she’s keeping him out of mischief or if they are plotting mischief together; sometimes, it feels like a little of both. Her ability to adjust her level of play between the adults and the children are one of the main reasons that we decided to keep her. It is amazing to watch her zoom around the yard, but as soon as the kids are outside she calms down and plays at their level. We really can’t imagine our lives without her and we’re so glad that we took the plunge to foster and eventually adopt.