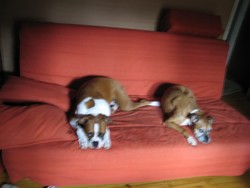 Maile’s the old gal with the white face. Sam, on the couch and floor, is her new best friend. Half-white face Sadie, and Boxer mix Oscar are also new buddies, but not like Sam.

Maile came to us just 2 1/2 weeks ago, 9/4 I believe. After 2 days in a crate getting familiar with the routines, she cried and cried to come outside and play with all of us. And so she did. The crate was put away and she’s found her own spot on the bed and couches amidst the other 3. She and Sam quickly became walking buddies, and playing buddies too. Even though she’s 8, she initiates play with her younger mates and wears them out, one by one. She’s gained 5 or 6 pounds since arriving and is nearing a good weight for her. (Too bad Sam can’t transfer a few pounds.)

She’s pretty jealous of attention from her humans and tries to steer the others away with her licks and kisses, but this is decreasing daily as she learns she’s safe and not going anywhere. She quickly learned the daily rituals that Boxers love so, and races to the dog door when it’s time to pick poop, a highlight of their day, Strange, but then….

She is a wonderful addition to our family. Thank you ABR.

Michel Hess, Sheri Frazier and the guys you just met.