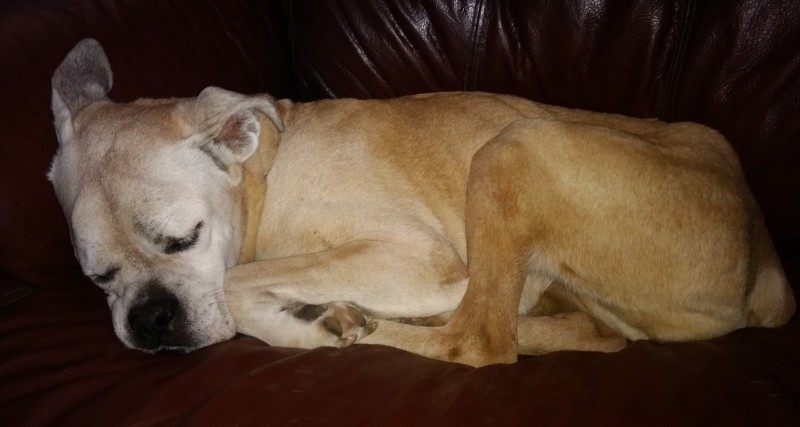 Sheri had lived with Boxers most of her life and introduced me to them with Cedric, a stray she found in 1989. We talked about adopting an older Boxer as he aged because they were often overlooked, and finally, she found ABR and followed it until she convinced me to adopt a Silverheart. Our first intro with Sam (from Craigslist before she found ABR) did not go well, but the ABR volunteer did not give up. The next day we all met Molly, who is now Maile, and she’s been with us since September 2010. Maile is a beautiful, fragrant vine used in very special leis in Hawaii, and she has always been a very special one in our home. She had to be at least 8 to be a Silverheart then and was described as “old as dirt” by those who aged Boxers back then.

Maile has welcomed 41 fosters and at least 8 other permanent residents to our home with grace and deference. She played and chased when she was younger, cajoled and snuggled as she got older. She always liked other dogs and all the people she could get. She hated the pool but loved the people it attracted. There has rarely been a moment when she was not near, and my frequent “God Damn it Maile” is a testament to how close she had to be.

It has become increasingly difficult for our Maile Magoo to get around, be part of the action and be close to her people. Her breath could melt concrete as she has always been a dedicated coprophagic (poop eater). Her hips are fused from arthritis, she only eats sporadically, and her meds are just not quite enough now. We could do more meds, or some kind of treatment, or some kind of therapy; but that’s for us, not for her. She showed us it’s time to go, she helped us all she can, it’s time for one of the young snots to step up.

We will miss you, under our feet, on the footstool, having us guard you while you languidly finish your meal, tripping over you getting out of the shower, and never ever using the bathroom without your careful attention. Aloha sweet Maile, until we meet again.