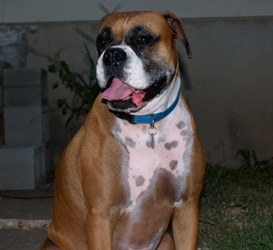 On July 18th, 2011 my best friend passed away.
Lucy was my first boxer – we met 12 years ago when she and I were both a bit spunkier and she was a lot of a Princess Rascal Rat. We bonded immediately over pizza and for the rest of our lives together, she always got the first and last bite of crust.
I learned the first day she came home with me that one needs to put a lot of planning when bringing a young boxer into your life. Let’s just say that after the first time I left her alone, I discovered that a white bathroom can get repainted, papered, and chiseled within 30 minutes. Soon afterwards I realized that an old guinea pig cage is a poor substitute for a dog crate. Apparently, being placed in a guinea pig cage is an outrage to a Princess Rascal Rat and deserves nothing less than a good reason to ask your property manager if she would consider increasing your pet deposit.
Lucy and I learned a lot together during that first year. She learned her name was “Lucy No” and I learned that figurines should not be placed less than four feet from the floor, that one should not try to housebreak a boxer by walking them under trees with fascinating pinecones, that dogs will become tired of carrots once they have figured out how to steal them from rabbits without hurting rabbits, that Yo-Yo Ma and his cello can soothe a “savage beast” – and that there is nearly nothing as comforting as waking up with a [lightly?] snoring boxer laying across your neck. Peace. Even more peaceful when they cuddle under the blankets with a paw over your shoulder. That’s love.
We also both learned that “thornless” prickly pear cacti actually have teeny, tiny thorns and, while they might be somewhat tasty, they are not harmless. They are definitely not harmless. They are mean.
Lucy and I learned a lot more during the rest of our years together. I think she learned how much I loved her when she jumped into a river to follow a stick and she realized that she did not like water and could not swim – and her mommy, who also did not like water and could barely swim – jumped in and held her with both arms, looking into each other’s eyes, doing the best doggie paddle ever.
She was with me during a period of significant life changes. She was there when I made a major career shift and moved back to Austin, cocking her head while I packed up the UHaul and sighing about the fact that a Princess Rascal Rat had to share a truck bench with every plant and other living creature that could fit into a 6X3 foot space.
Lucy was there during the loss of family members, during the breakups of relationships, during other career changes. She pulled on my leash (or was it her leash?) when I had a hitch in my giddy-up. When I was laughing and singing, she’d pull on my shorts to make me dance with her. Everyday when I was getting into my car after work, I thought about seeing her and her kidney beaning. Every single time, for 12 years, she greeted me at the door, leaping high for years and then a little less as she got older – but always leaping like a fawn unicorn.
Because of my love for Lucy, I realized that I have a profound love for boxers, which led me to LSBR and ABR. This made her sigh at times, because she was a Princess Rascal Rat who had a flair for melodrama when she felt it necessary. However, I think she understood that, as sad or hurt dogs came into our special home, happy or well dogs would find their way into their special homes.
Lucy and I bought our first house together. When I closed and got the key, we lay on the carpet and I said “this is our place.” Two weeks later when I was painting, she ran around like a unicorn rat, stepped into the paint tray, and marked the carpet with yellow paw prints across the house. For over ten years, she let me pull out carpet, remove decades-old tile, put in new tile, paint over and over, move around furniture constantly, and change her yard.
Lucy’s passing was peaceful. She had been getting a little tired the last couple of months, but nothing was out of the norm for a Princess who had long ago turned into the Empress.
On July 18th, 2011 her big ole heart rested. We both were home and, although that first night was the first I had spent there without her, it’s still our place.