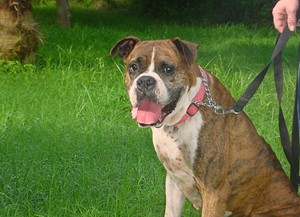 Lazzie died shortly after midnight tonight. As I think I’ve shared with most of you, I am convinced that Lazarus and I were meant to know each other. When I met him at the Austin Boxer Rescue Kennels I was haunted by the look in his eyes and within a few days I decided to foster him while he was being treated for heartworms. Of course it was soon thereafter that we learned his heartworms were so advanced that his heart was irreparably damaged and he was expected to die within weeks. He lived five months. In those five months, he learned that he was lovable and that life could be good. He learned to play with toys, to walk on a leash, to share his food, to hog the bed, and to accept and give affection. He also, with the help of hundreds of peanut butter sandwiches, gained almost twenty pounds. He weighed 82 lbs at his last vet appointment. Unfortunately, some of his past continued to haunt him until the end. I think the most heartbreaking thing was how he would run and hide anytime someone opened the pop-top of an aluminum can. That scared him so badly that he got nervous anytime someone went into the garage…….because all my sodas are in the refridgerator in the garage. When I first brought Lazarus home he couldn’t walk on a floor, he wouldn’t make eye contact, and he was nervous about being touched. Even so, the first night in my house he climbed up on the couch where I was sitting, laid down, and put his head on my lap. What I didn’t know at the time was that he wouldn’t show that amount of tenderness or affection to me again for weeks. I truly believe that he was saying “Thank you. I know I’m safe now.”
Tonight, it’s me that wants to thank him. Lazarus reminded me of two things that I knew deep down, but had forgotten. One is to listen to be called and then have the faith the accept that call. I really didn’t want two dogs; my house is totally crowded with two big crates, it was treacherous at times to walk two dogs together, and Lazarus and Gemma were not exactly enamored of each other at first. But, I knew that I was called to care for him and I’m so thankful that I did. The second lesson of which he reminded me is that, sometimes, love can work miracles. Years ago my friend David Smith, an angel on Earth, told me that someone can be healed without being cured. My deepest hope is that Lazarus experienced that: I couldn’t repair the damage done to his heart by the heartworms, but I hope that his time with me, Gemma, and all of my friends and family were enough to heal the wounds he suffered before he came to me.
Rest in peace, Big Lazzie. Gemmy and I will miss our sweet boy. Thank you for all that your taught me.
Marie