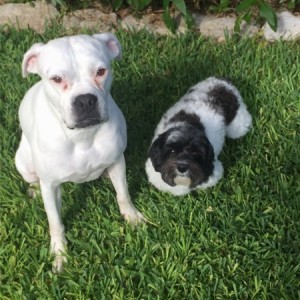 Beautiful and stout, there she was walking down the street with several little ones trotting to keep up by her side. Nowhere for them to go and unable to speak to ask for help, she wasn’t sure where their next meal or drink of water would come from. Instinctively, knocking over trash cans, rummaging for food, and drinking from puddles of water became her mode of survival.
One day, Laci Lou and her little ones were spotted by animal control, who quickly notified the Alamo Boxer Rescue. Rescued by this amazing organization run by volunteers, they were placed in foster homes.

What is the significance of Alamo Boxer Rescue?
All of the boxers are fostered while in the care of the Alamo Boxer Rescue by volunteers. These dogs’ personalities, temperaments and medical issues are well known before being placed with a family. This is important when giving these special “family members” a second chance in a new forever home.

Previous, to my husband beginning his research on the Alamo Boxer Rescue website, we lost a beautiful gray boxer and an old cocker spaniel. With a lonely one year old Maltipoo and void in our family, we visited Pet’s Barn in Schertz, where the boxer rescue held an adoption day. That is the day we met Laci Lou, and there was an instant connection. Reminding us of our previous boxer, her mannerisms, full of excitement, Laci danced the same and moved her head about in circles of approval. Leaving Pet’s Barn, we couldn’t stop talking about Laci Lou. A couple of days later, we found ourselves in the adoption process and added this affectionate, loving, four legged darling to our family. Our family hasn’t been happier. Molli Mae, the Maltipoo, has a playmate who plays hours on end. They share toys, play tug-of-war with them and chase each other through the house. Make no mistake though, at only 10 pounds, Molli Mae is the alpha. Laci Lou’s loyalty, with daily greetings including wiggly dances and tongue baths, are enough to turn any bad day around. This success story is a win-win for all. Laci Lou has filled a void in our lives, and she has a family that loves her unconditionally just as she loves us.

Being a unique breed, boxers possess special characteristics families should become aware of when considering this magnificent animal. High energy in nature, these loyal companions need a backyard for play and opportunities for exercise. When left alone, boxers will get into mischief. Laci Lou is notorious for getting bread, tortillas, and whatever she can get her paws on to eat or destroy while we are not home, if she is not crated or has not had enough exercise. Keeping these playful dogs stimulated with toys, and taking them on a walk before leaving them alone is imperative.

These emotionally charged dogs will sulk when scolded for wrong doing, letting you know they are remorseful. The times we have walked into a huge mess Laci has made by eating packages of food or tearing up rolls of toilet paper, she receives a lecture. She bows her head and tucks her nub of a tail in remorse. Yet, when praised, they join you in excitement by wiggling all over. Wiggle all over is exactly what Laci does when she is being praised. It’s in one’s best interest to keep his/her distance during such an episode, because all of the wiggles and dancing could result in human injury. Boxers indisputably underestimate their size.

It is important to feed these compassionate dogs food without corn. Corn tends to leave this breed with bellies full of gas. Laci, as well as our previous boxer, have silent, but deadly toots. You will not hear a sound, but you will quickly suffer from the smell of rotten hard boiled eggs.

Don’t be alarmed by noises boxers make. They do snore because of the shape of their nose, and they also tend to have vivid dreams that cause them to move and whimper. Both boxers we have experienced, snore louder than grandpa. A little nudge will help them change position, and you will get back to sleep quickly. They are also dreamers. In their dreams, they love chasing rabbits, kitties, frogs and probably butterflies too. One knows these high powered dogs are chasing in dreams with the rapid movements of their legs. Whimpering is their favorite sound to make while dreaming.

Adopting Laci Lou has brought happiness to our family. We simply began the process by visiting austinboxerrescue.com. Next, we attended an adoption day. Then, we contacted Alamo Boxer Rescue, completed an adoption application and set up a home visit. During the home visit, we, along with Laci’s foster family, agreed our home was a perfect placement for Laci. That special day, Laci found her new forever home. Not only did she get rescued, she rescued our family from the void of losing our previous two furry family members. Through our experiences of loving our previous boxer and adopting Laci Lou through the rescue, we have learned many important things helping us better care for our boxer.