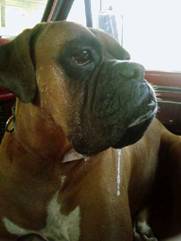 I met Kirby at the ABR adoption day in February 2008. I had read about him on the website; he was one of the “featured” adoptees, probably because he had been with ABR for two years. His foster dad, Stan, told me that Kirby had been adopted and returned twice, but that “he’s a great dog who just needs someone who won’t give up on him.” I was certain that I could be that person.
Who knew that rescue groups make home visits? Aware of what people go through for two-legged adoptions, I cleaned my house in a frenzy, giving special attention to the bathrooms, lest I fail the inspection and lose Kirby due to a pile of dirty laundry or germs on exposed surfaces. I passed, though, and the next week, I went to Stan’s to get my dog.
“The big guy knows something special is happening today,” Stan said. I clipped on Kirby’s new leash, and we took a long walk through the neighborhood before getting in the truck for the ride home. On the way, we stopped at Sonic for a celebratory beverage, while Kirby slept in the back seat. Since that day, I refer to the Cedar Park Sonic as “Kirby’s Sonic.”
We belonged to each other for just three years and three months. Kirby became my traveling buddy, going with me for walks and rides. I created a hand signal for “Want to go for a ride?” so that we could slip out and take off without the other dogs knowing where we were going. Everyone Kirby met became his new best friend. Many outings included a stop at Sonic, Kirby’s favorite eatery, where he enjoyed a large ice water and tater tots. One of my favorite photos of him, pictured here, was taken at Sonic, of Kirby watching for the carhop to bring his order, stalactites of anticipatory drool dangling from his jowls. At home, he would sometimes sniff his water and then look up at me, which I knew was my cue to fill the Styrofoam Sonic cup I kept for him with ice and water. I’d put it on the floor, and he would slurp to his heart’s content, perhaps imagining that he was back at the drive in.
I’ve always made up signature songs for my dogs. They are corny, but they capture something of the dog’s personality. Here is the poem for Kirby’s song:
I have a dog named Kirby, and I call him Kirbalicious.
He’s good enough to eat, his kisses really are nutritious.
The day he came to live with me will always be auspicious:
I fell in love with Kirby dog; that’s why he’s Kirbalicious!
Kirby had many of the traits that boxers share, but he didn’t snore. He did, however, like to stretch his 83-pound body sideways against all the bed pillows, so sometimes I got another pillow and slept below him in the bed. He was a great sleeper. Because he was so big, with an enormous head, he could almost put my entire face in his mouth. He liked to gently nibble my nose, which made me laugh, which blew air out his big ol’ lips, and we usually ended up rolling around in a smooching competition.
At some moment in Kirby’s brief life, perhaps when he was homeless and a stray, his immune system faltered. A cell mutated, then another. A deadly tumor known as hemangiosarcoma began to grow on his heart. Then it metastasized to other organs.

On May 16, 2011, I returned home from a few days away. When Kirby didn’t come to greet me, I knew immediately that something was terribly wrong. He managed to walk slowly from the porch, where he had been lying, to my car. Instead of his usual boxer dance, he rested his head in my lap for a moment, then turned and headed back toward the house. He collapsed on the way. Loving me as much as I loved him, he had held on, waiting for me to come home. Now I was back. We were together, and then he was gone.
I can see his grave from the porch where he waited for me to come back to him. I sing his song to him……I had a dog named Kirby, and I called him Kirbalicious…
Kathryn Avery