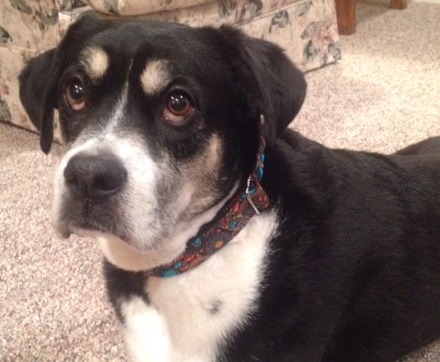 I adopted Keely from Austin Boxer Rescue in October 2009. I didn’t choose her, my ex-husband did, but it was one of the best decisions he made during our time together. Keely is obviously not a pure bred boxer so I did a DNA test and found out that she is 75% boxer. It doesn’t matter what she is, what matters is she is one of the sweetest, most gentle, loving dogs I’ve ever known. She had been adopted repeatedly from the rescue, but returned time after time for various reasons. I actually adopted this sweet angel simply because I wanted to ensure that she finally had a true forever home, not another one that would bail on her because she wasn’t perfect, one where she would be loved for the amazing, gentle girl she was.

Keely was my shadow – literally. I could have attached her to my ankle with a 2-foot leash and she would not have stayed any closer to me than she did. Every step I took at home my Keely was there right by my side. This amazing, sweet girl had her challenges. She was one of the most fearful dogs I’ve ever encountered. The entire first year we had her she would dive under the bed every time my husband came home. Her fear was focused on people, but mostly men. She was never afraid of other dogs, or thunder, or the vacuum, or other loud noises. In the 5 years I had her she became less afraid, but after my husband moved out she became a whole new dog. She no longer clung to me to keep her safe and no more trips under the bed. My ex-husband was never mean to her, but her fear ran deep.

Keely was always really great with other dogs. I believe they could sense that she was not a threat on any level. This little lady was incredibly submissive, so much so that my most dominant dog never once growled at her (even though she felt the need to let every dog know their place with her). I foster for Austin Boxer Rescue and Keely was always the first dog to meet the new foster when they arrived. I knew I could trust her to be calm, sweet, and gentle and it worked every single time. My sweet Keely welcomed over a dozen foster dogs into my home and there was never any conflict. I trusted Keely to make these dogs feel at ease in their new surroundings. I trusted Keely like I’ve never trusted another dog.

Despite her fear of people, Keely had the heart of a lion, especially when it came to her dog friends. 2 of our dogs would occasionally get into a fight and Keely never got involved, but when a human tried to break up the fight Keely would see that as her dog friends being attacked and she would risk her life (in her mind) to help them. My ex-husband took some pretty painful bites from Keely when he tried to break up dog fights, but we never could convince her that he wasn’t attacking her friends. I later found out that she was picked up with her sister (her actual litter-mate) and that she was very protective of Fiona. My gentle, fearful girl turned out to be as brave as she needed to be.

My darling Keely was a ninja dog. Unnaturally silent, this 55-pound girl could slip into or out of a room without anyone noticing. She never barked at other dogs, intruders, or the local wildlife like the other dogs. We had 4 dogs and 3 would line up barking at some imagined danger and Keely would stand behind them as quiet as a statue. Even her presence was always very quiet and calming. Her profound quiet was one of her defining characteristics.

The day after Christmas last year my baby was diagnosed with insulinoma, cancer on her pancreas. It was such a shock for me. I was told she would have 6 to 12 months left. As always, Keely handled this diagnosis with quiet strength taking her meds and dealing with the side effects without complaint. Amazingly, she never was symptomatic and it was easy to forget that she was sick. One day she refused breakfast. Very early the next morning she died quietly in my arms. In the end it wasn’t the cancer that took her from me, she died quickly and apparently with no pain. That was 10 months after her terminal diagnosis. 10 months I wouldn’t have traded for anything in the world.

I have other dogs that I love very much, but there has never been, and will never be another precious soul like my Keely. A true one-of-a-kind dog and a very special friend. I love you precious baby – rest easy my friend.

Jacque
“It is only with the heart that one can see rightly; what is essential is invisible to the eye.”