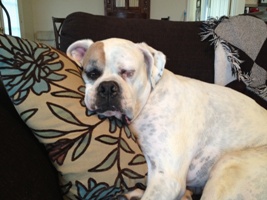 It is with a heavy heart that I announce Kalu has crossed over the rainbow bridge. His aching and failing body was put to rest on Wednesday June 20th. We only had Lou for a short time but he was loved and well cared for. He was a stoic old man who my friends said reminded them of an old World War II veteran. Old, barely walking, but still fighting. He hated getting baths and loved getting on the bed although he wasn’t able to by himself. He would put his two front paws on the bed and look at you with his one good eye as to say “umm a little help here, I’m old you know.” He had recently lost his owner of 10 years and I think his heart was broken never to recover. I believe in my heart those last days he was begging and pleading with me to let him go so that he could be reunited with her.
I wanted to write this memorial in order to honor his life. I wish I could of known Lou before and seen him as an young pup. I am sure he was very handsome with a regal and demanding presence. Although it was terrible to let him go, I am comforted by the fact that he is now with his owner, finally being able to do boxer burns and stub wags.
Rest in Peace my sweet old man. I’m so glad we were able to comfort you and take care of you in your last days. It was an honor and a privilege. Run free sweet soul.