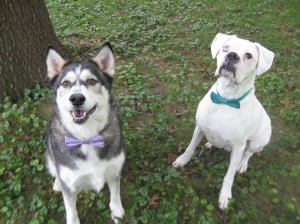 In December 2008 / January 2009, I went through the process to adopt Iggy (formerly “Biggie”) from your wonderful organization. He was my first experience with “online dating” – reading his profile and falling completely in love. He was described as a very romantic guy, loving to cuddle on the couch, take long walks, and dinners and lunches and snacks. I met him for the first time at an adoption event in a park, and his foster parents introduced us. He was currently having to stay at a vet’s office, because he had a run in with his foster parent’s cats, and his face was still pretty scratched up. But he was so sweet, and had such a great zest for life. He met my female husky, Sasha, a few days later, and after she explained to him that they were going to be brother and sister, NOT girlfriend and boyfriend, they got along fine.

When Iggy had been part of my family for about a year, I went through a really tough divorce, and the dogs and I moved to Kentucky. Iggy was a huge comfort to me, always by my side, following me around the house whenever I was home, in my lap or under my arm whenever I sat down. Over time we built a new life together, and then a couple of years ago we had another online dating success, and began bringing Tony into our “pack.” Iggy and Sasha were Tony’s first dogs, and they have trained him well, teaching him all about the good things in life – car rides with the windows down, checking out how everything smells on a walk. Tony loves to cook, and Iggy liked to play sous chef to clean up anything accidentally dropped in the kitchen. Iggy also taught Tony how to play like a dog, front paws out, tail up. And Tony and Iggy liked to “talk” to each other especially before dinner time. Tony learning about dogs through Iggy played a big part in me getting to know and learning to trust Tony. So it was only fitting that a few weeks ago when Tony proposed, he did it out in the backyard, under the tress where the dogs like to play.

Iggy has had some ongoing health issues, including some autoimmune disorder issues, but we had no idea that he also had a mass on his heart until yesterday. He was happy and looking for treats and wanting to play up until something gave way, and there was not much that could be done once the vet found the problem. We said our goodbyes at about 2 AM this morning.

There is a special place near Louisville, KY called Bernheim Research Forrest, and Iggy especially loved to walk there, and then sit and watch ducks on the pond. Those are some of my best memories of him (although his counter surfing also generated plenty of memorable exploits over the years).

Thank you for the wonderful work that you do to connect good, deserving puppies with people who need them and love them. Iggy walked with me through the hardest chapter of my life, and while my heart is broken today, I am so grateful for the time that we had together.