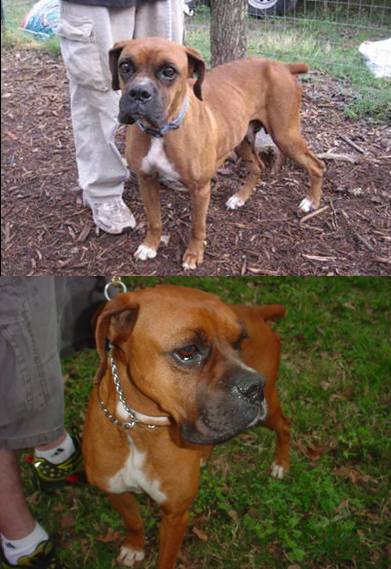 Henrietta was a sweet 3 year old baby girl that had a very sad life. She was found as a stray in San Antonio and taken to the local kill shelter, where we were able to safe her from euthanasia. She was incredibly emaciated when she came into rescue and has scars on all over her body that told the tale of her hard life. One scar appeared to be from a rope or chain, where she likely spent her days tied up, that got tied around her back leg. Two more where an her back legs from sitting on pavement or hard dirt for a long period of time. Then there were the giant memory glands that obviously showed she had been used heavily for breeding. Additionally, she had contracted heartworms, a tick borne disease from the infestation of ticks that covered her body, and a life of poor nutrition that was evident from her poor coat and thin body frame.
With all she hardships she had to endure she had the best personality. She had a love for life and a very free spirit. There was not a dog on the planet that she didn’t want to play with and she was very affectionate and tentative to every person she ever met. Her life had taken a dramatic turn for the better when she entered rescue because all her ailments were fixable and she would be able to have a life with a family that would love her forever. After about a month and a half in rescue she went to our vet to get spayed, vaccinated and prepared for adoption. She was at the vet for a few weeks and when they went to spay her they noticed she had huge lymph nodes. They were swollen all over her body from her head to her tail, they ranged from marble size to the size of a small orange. This was very bad news for Henrietta as this meant she had an aggressive form of cancer called lymphoma. She was picked up for the vet quickly and placed into a hospice foster home. We knew the end was near, we just did not know how close she was to the end. Less than two weeks after being placed into foster care she took a turn for the worst. She had stopped eating and was vomiting up everything she drank in addition to looking like a skeleton.
On Saturday, May 31st at 12:17 she lost her battle with lymphoma. She left behind a vet clinic that knew her and loved her and her pervious foster Jennifer and then her hospice foster Stan. She was such a great dog and we all hope she had a nice happy end to the hard life she had previously suffered.
She did have a good few months in rescue-the two pictures show Henrietta when she first came into rescue and then a month or so later when she gained weight and her coat started to shine.