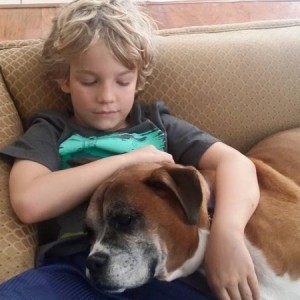 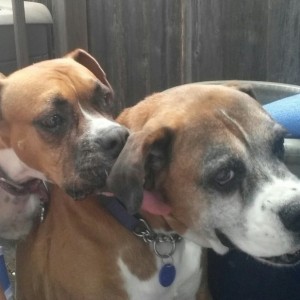 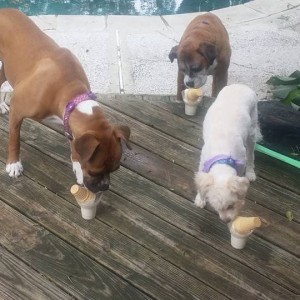 We met Gracie in September 2015. When her foster parents brought her to meet us, she refused to come in the house. She put on all four brakes and wasn’t going to budge. Once she was in the house she stayed in the same spot for at least four hours before she could be coaxed out with food to explore. It would be months before she became just a little comfortable in our house. She was very suspicious of any guests we had and would revert back to the scared hunkered down girl we met originally. She is terrified of men and even growled at my dad and brother-in-law on a couple of occasions.

We knew she loved kids (she loved our two and any that came over to play) and she loved other dogs. We have a blind and deaf poodle mix that Gracie would try to play with until she realized he is more of a decoration than a playmate. :) So, in February of this year, we brought home one of ABR’s Silver Hearts. Despite being abandoned by his people, Duncan is an amazingly friendly dog with such a big heart. He not only loves everyone he meets, he has a particular fondness for men. Quite the opposite of our Gracie. Gracie and Duncan became fast friends and one of my favorite things to see is Gracie smother him in kisses. Duncan has helped Gracie trust and she no longer hunkers down when guests come over. As a matter of fact, the last time my father and brother-in-law were here, Gracie went up to them for some love just as she had seen Duncan do.

Our daughter has attended the dog camp for the past two years and wanted desperately for Gracie to join her this year. No matter how far Gracie had come, I was still nervous about putting her in a chaotic camp atmosphere with so many other dogs and people. My daughter and Gracie finished their week of camp and Gracie was amazing. She did not have the confidence of the other dogs and she was certainly slow through the obstacles but she did great. We are all so proud of her.