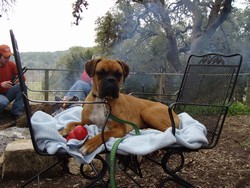 Giorgio (aka Giorgie) is doing quite well in his forever home! We’re pretty sure he thinks he’s a lap dog because his favorite thing to do is to crawl up in our laps and snooze. When he’s feeling more rambunctious, Giorgie loves to tug on ropes and throw around squeaky toys – he’s already killed two squeakers! Giorgie has had fun socializing with other dogs, and recently met his cousin, Bentley, a miniature pinscher with a fierce bark. Giorgie wanted nothing more than to wrestle with little Bentley, but he doesn’t quite know his strength just yet! Giorgie will be off to school soon for some obedience training which will hopefully tame his jumping while helping him channel his puppy spirit!