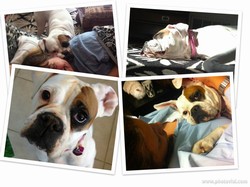 Hi, I wanted to send an update on my adopted boxer, Geraldine!

I met Gigi (aka Geraldine) twice at the Austin Adoption Day back in January. Her foster mom and dad were clearly devoted to her and needed to make sure that I was worthy of such a gem. I still can’t believe how lucky I was to get her! Don’t let that forlorn face fool you. Nobody can wiggle a happy tail faster than Gigi. (We like to say she’s a funeral in the front and a party in the back.) She wiggles and snorts and kisses better than anyone around. She truly prefers nothing more than cuddling up on the couch. Or the bed, or anywhere she can rest her head and snore to her heart’s content. She is a gold champion snorer! When she wakes up from a nap, she is always game to hop in the car and take off for a new adventure or meet a new friend. I just love every minute with Gigi! She has amassed a collection of names including Geraldine, Gigi, Biscuit and Dogface but she doesn’t seem to mind. I think she misses having a dog sibling, though. When she has visited the dog park, she makes a beeline for the boxers. She hasn’t begged specifically for a boxer rescue brother but I think that is just cause she has such polite manners. We are thinking it might be a good idea in the future! Thank you Austin Boxer Rescue for all you do. -Jill Adams