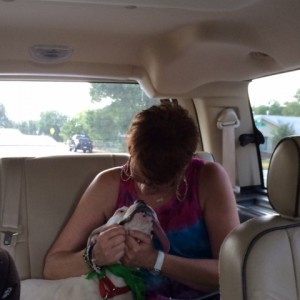 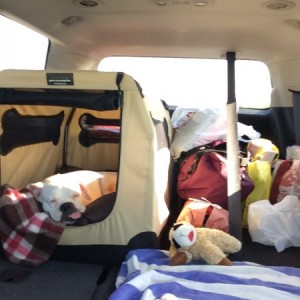 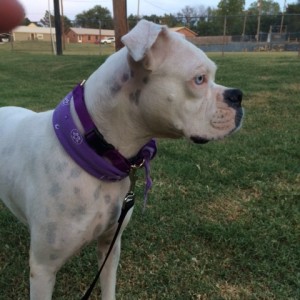 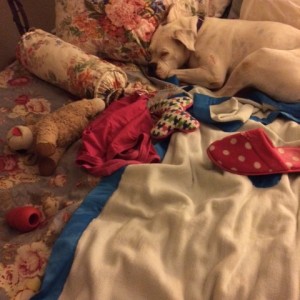 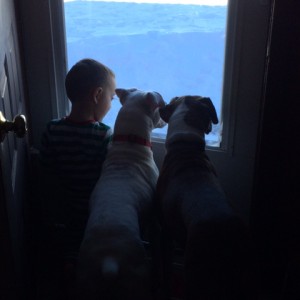 Gidget Bardot, formerly ABR Gava, chose me! She wasn’t on my list to meet at adoption day until my three year old grandson told his Mom I should get a white dog and she suggested Gava. My first thought was “that tongue, how can I deal with that?” Six months later, it’s one of her most endearing qualities :)
My grand-dog-daughter, Ellie (former ABR Elf) attended the adoption and she loved Gava from the moment they met. I knew she was a great dog when we grabbed to-go Whataburger after the adoption and she moved to the other side of the truck and stayed there until I finished eating. Then she came and cuddled all the way to Brenham. One year later, she does not show the same manners, standing on the console, taking that long tongue and licking the entire side of my face anytime I sing-a-long with the radio!
I’ve never been quick to name any animal but my Daughter-in-law wasn’t having it and before we reached Washington County Gava became Gidget, which made sense. She was from Mission, TX; a blonde haired, blue-eyed Valley girl! We stayed in Brenham for several more days before starting our 8 1/2 hour journey home to the rolling plains of the Northeastern Texas Panhandle.
Around hour 6, she got out of her crate, looked out the window, looked over her shoulder at me as if asking, “just where are you taking me?” Ironic she was found at the South end of Hwy 83 and I was taking her to the North end of the same Highway; over 700 miles! She’s a terrific travel companion, BTW!
At this point, I should mention how grateful I was to receive ABR’s Boxer Manual. I read it from cover to cover and still refer to it if an issue arises.
A shout out to her Foster Mom, Bea Morse, for the encouraging phone conversations when her stubborn streak surfaced. Gidget seemed very sad the first few weeks and I think she missed her foster fur buddies.
As our “Gotcha Day” has come and gone, She is impatiently waiting on me for her evening stroll around the park. It’s hard to believe one year has passed. I cannot imagine her not in my life. She adjusted rather quickly to my lifestyle and loves to go to work with me greeting each customer with her wild wiggle butt hello.
Love my Giddgee … Thanks and much love to ABR for all you do!