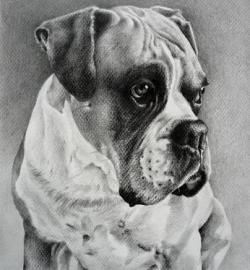 My love, Elvis, left my side yesterday. I was so blessed to have him enter my life 10 years ago. He came to me thru Boxer Rescue Los Angeles, who rescued him after being hit on a freeway. They raised money to provide him with pelvis surgery and he became known as Pelvis Elvis. I volunteered to transport him after his surgery to a kennel to recover but once I met him I knew I was going to transport him straight to my house instead. He was the best patient and so sweet and thankful to have a second chance. He quickly became my second foster failure. My first foster failure, Roxi, had met her match. Over the years he has battled cancer but had such a strong will to live out his happy life. He has been thru so much with me and I am so grateful to have had him. He was a special dog and I will miss him terribly, but he is in a wonderful place and his spirit will always be with me. I know Roxi was waiting for him on the other side, and it warms my heart to think of them together again.
He leaves behind Minnie and my youngest, Hank, who looked up to him and adored him (really, he did). He was also a wonderful foster brother to many dogs and puppies in need over the years working with me in rescue….he especially liked the puppies.
I put together some photos of him to remember him by in the link below. You might not be able to tell, but he did love the camera because it was usually followed by “treats”.
WE LOVE YOU ELVIS.
Dana