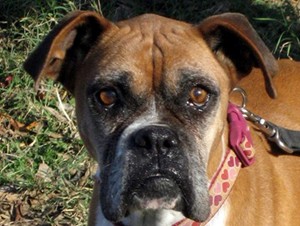 Ellie was an elderly boxer who came into ABR as a stray from the San Antonio shelter. When she got to my house, it was apparent that she was not in the greatest of health. She went to the vet last week to get spayed and it became obvious at that point that she was in a very poor condition. She had a scar indicating that she had previously undergone a mastectomy (but, surprisingly, had never been spayed). She had another mammary tumor, a lemon-sized tumor on her shoulder, plus several other small tumors throughout her body. The veterinarian told me Ellie would not be with us very much longer. She had not eaten anything for 2 weeks and she continued to lose weight as my concern for her heightened. Today she decided she wanted to spend the day outside. I thought it was too cold, but sweet Ellie was stubborn and determined to enjoy the cool, crisp day. I let her stay out and periodically checked on her to see if she had turned into a Popsicle. I would peek my head outside and say, “Ellie…it’s freezing are you ready to come inside where it’s warm?” Ellie would look at me and smile (literally) and walk away… I knew she was happy. I fed her a half of a can of puppy food in warm water and she slowly ate it throughout the day. In the early evening, Ellie began to breathe heavily and would not stand up. We drove her immediately to the Emergency Clinic because we did not want her to suffer. The vet agreed with my initial instinct, that she would need to be euthanized or she would suffer through out the night. I took her for one last walk outside to pee and to feel the breeze on her face. She could barely stand at this point in time, but she managed to make it outside for one last pee with dignity. We walked back in and away she went…I feel very sad that I did not know Ellie very long. I am also sad that I could not have gotten to her sooner to take better care of her from the beginning of her life. The reality is that I can not change the past, but I did get the opportunity to love and support this magnificent dog during her final weeks of life. Please give your babies a big hug and kiss. Ellie was a very happy dog and she had a loving caring “family” at the end of her life.
– Jen