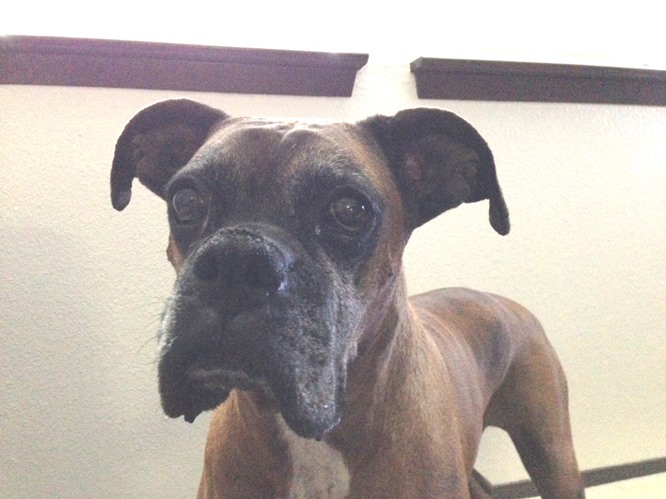 I first met Don Pablo (a.k.a. “Pablo” to Austin Boxer Rescue staff) at one of ABR’s Adoption Days in October 2011. (Thanks to Babs for introducing us!) I was immediately drawn to him, and we remained together for nearly four years. He was my constant shadow and never left my side. I kept his original name, but added “Don” to indicate that he would never be viewed as just a rescue dog.

Don Pablo had a huge personality and instantly made an impression on people wherever he went. When we went for walks, people would notice him and often remark, “He’s such a handsome dog!” Few could resist Pablo’s charm once they met him. In fact, staff at one boarding facility fondly nicknamed him “Mr. Wigglebutt” because of his exuberance when greeting people.

We lived in Austin for two years, and then moved to Idaho in summer 2013. Don Pablo really enjoyed going for walks along Boise’s Greenbelt and wading in the river for a drink. He also loved fetching his blue racquetball (his favorite toy!), playing keep away from “Dad”, and going for rides in the car. Frequently when retrieving his ball, he would chuff loudly and then show it proudly to me. Whenever he realized that he was going for a ride, he would get so excited! He remained a big puppy at heart and never let a day go by without goofing around.

In May 2015 Pablo lost his long battle with heart disease. God gave me a sign when it was time. I stayed at Don Pablo’s side, stroking his head, as he left the physical world. He departed peacefully, loved, and with dignity. He deserved nothing less. He was a very special dog, and I will remain thankful that I had a chance to know him. I expect that our reunion on the Other Side will be truly joyful.

I am extremely grateful to Austin Boxer Rescue for bringing Don Pablo and me together. God bless you for all you do rescuing boxers and uniting them with their pet parents.