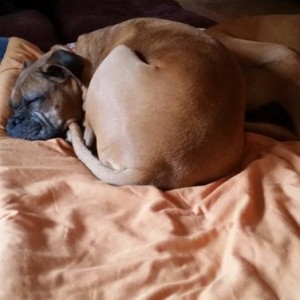 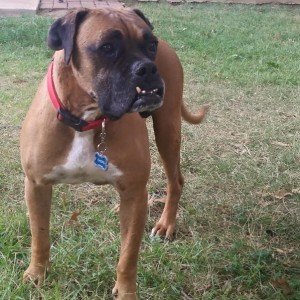 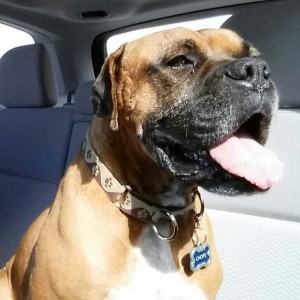 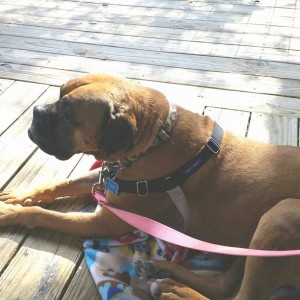 Today is “gotcha day” in our family. May 9. It’s been one year since we adopted ABR Prodigy. Having been adopted and just not happy in his new home, his previous adopter contacted us, his former fosters, to see if we wanted him. While at his new home, he became clingy, insecure and whined constantly. I was hopeful that he had recovered enough from the scars of his past, being bullied by other dogs, chased and chewed on. His ears and multiple scars told a story that people don’t like to hear about. That even sweet boxers can be and are used as bait dogs for fighting. My heart broke the day he went to live with the new family, because in spite of his past, he was able to trust his foster siblings, one of whom was an ABR alum as well.

It only took one phone call for our family to decide he was going to be ours for good. Only one more phone call to the ABR Adoption Coordinator to confirm the plans and only one more car ride to pick him up and take him back to where he really belonged: Home. And once he was there, he became Chops. Why Chops? Because he has great chops! Just look at that face! The other three dogs in our pack were so excited to see him again, lots of licking, whimpering and jumping around. A furry reunion of sorts!

In this year, he has survived two surgeries for mast cell tumors, one on his leg and one on his eye. Not once did he complain or get scared. He brings joy (and slobbery kisses) to everyone he greets. While still a little leery of other dogs, professional training and time have afforded him the ability to be around them without being fearful. Every day he is happy, flopping around in the yard, rolling in the grass, napping on the patio or on the couch. He even “supervises” dad while in the home office, often chiming in on conference calls! Chops has enriched our lives more than we could imagine. We are grateful for the work of the ABR volunteers who saved him from the streets of El Paso and brought him to Austin. Two paws up!