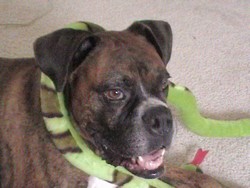 I just wanted everyone to know that Chester is doing Great! We love him as another member of the family. After Hogan our last Lab passed away; I said that I would never own a dog, but then as days went by we were still sad but I then found Austin Boxer Rescue and found Chester. He was severely underweight when we received him and now look at him he has grown into a healthy boy. So I took Chester to our vet and he thinks that in some point in his life he could have been hit by a car! He limps on his right leg when we walk, play.. so forth. So we took x-rays, and sent them off to an orthopedic surgeon that teaches at A&M. So we are waiting to see if surgery would be helpful or not. Besides with or without a limp we love him the same. The first time we saw him he wouldn’t stop wagging his tail, nor stop licking you, and still does that everyday. Since the rescue center saved him from Kerrville, TX shortly before we adopted him we thought that to be an omen since we just moved from Kerrville one year ago. Our son, family, and friends and so ecstatic on his behavior. We have learned to sit, stay (on occasion), and we are working on fetch. We have only had Chester for a few months but it seams as though we were never without him! Thanks so Much! I will keep you guys updated.