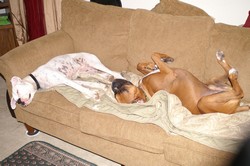 Butch aka Bo came to us rather sick. He had double pneumonia but no one knew he was sick. Once we got him treated thank you to the Hiway 620 Animal Hospital and Jen, he began to show his real personality. Bo is really laid back but has his playful side. I went looking for a dog specifically of his nature because we also have a white female boxer that is anything but laid back and we hoped not only for a playmate for her, but maybe he would rub off on her some. Didn’t happen but thank goodness, she didn’t rub off on him!!!
Bo must have had a rough time before he was rescued by ABR. Even after a year he will cower at sudden movements and loud noises. But that didn’t make him anything but a loving dog wanna be lap dog. He loves playing with sister Marley and Daddy. Not usually at the same time. He can be just as selfish with Daddy as the girl can. He will also jump in to the bed with Daddy as soon as I leave it in the morning. (He knows he’s not allowed in the bed, but he also knows Daddy is a soft touch)

The picture is a common occurrence now. They both stretch out on the couch and we have to find another place to sit.