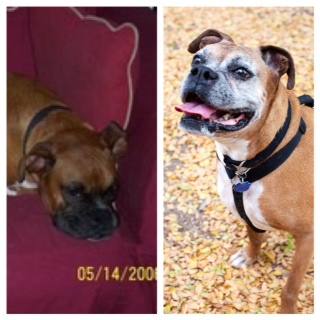 For those that still don’t know and I guess some still don’t, we lost Buddy our oldest boxer this week, Tuesday. We decided it was time to let him go. We put him down – put him to sleep – let him go – whichever is the right way to say it – whatever way , he is gone. It’s not going to ever be easy to talk about. I’m still upset so please, if you see me, don’t ask me about it b/c I won’t be able to talk about it without crying. I don’t know if I ever will be able to so I will write about it now and can refer to it here if anyone needs me to. I can’t sleep and have been going over it in my head and keep thinking and wondering “what if” a lot.
For those that don’t know about Buddy, he was our 14 (we think) year old Austin Boxer Rescue we got in May 2006 (about 2 weeks after Rocky our white boxer died). They didn’t know how old he was for sure since he was found on the streets eating out of trash cans. We had to put a pad lock on ours since he figured out how to get past the baby proof locks easily. :) He was one smart cookie. He had the worst case of separation anxiety a dog could have. He didn’t mind being in a closed room as long as I was in there with him. He didn’t want Mike or Jaxi – it had to be me. :) So it was tough when he and D.Bo decided it was one of them in charge as the Alpha Male of our household and fought (maybe to the death) back in 2009, and we had to keep them separated from that point on. But we managed as we always seem to do.
In 2011, when Buddy started “marking” the carpet with squirrly q’s like he was writing his name, we started worrying. And then he started slipping on one of his back legs sometimes while walking. Asking the vet about it, he mentioned it might be a sign of something. What was happening was a sign of a pinched nerve to the back end causing him to lose feeling to the pee parts and the legs. It might have been due to vertebrae squeezing the nerve or a tumor, but without an MRI, we’d never know for sure. Since he was over 13 surgery and recovery would be too hard on him and no guarantees and so expensive, we didn’t go that route. He was happy and no pain otherwise. Just slower and having a few more accidents in the house but we dealt with it. We tried cold laser therapy to stimulate the circulation to see if feeling would come back but it didn’t work. So we helped him get around the slick spots with a leash/towel under his pelvic area to lift his bottom and he dragged his legs like a seal over the carpet mostly. He got around pretty quick when he wanted to get somewhere and his personality never changed and neither did his appetite!
In January 2012 we built him a ramp. He started having some trouble getting over the patio door jamb. He had some scraped up legs. We tried some doggie male wraps – lots of towels and lots of accidents. Some people might have gotten frustrated at that point with having to deal with all the accidents or having to help him out and might have put him down then.
July of 2012, I started looking into our options – how much it cost – what they did, cremating, burial, etc. I still couldn’t do it though b/c he was still Buddy and would not let him go, until he let me know he wasn’t “him” anymore. Maybe that was selfish of me – but I wouldn’t hurt him ever on purpose. It did get worse, he got slower, lost more of the use, more of the feeling, more accidents, less moving, we tried every type of doggie diaper, then on to human diapers, and finally settled into a routine.
On Monday evening, he got bad and really wasn’t Buddy anymore. So Tuesday I took him in and the vet told me that his brain had been working on trying to work his back end and was tired of trying. He was starting to shut down the rest of his organs. He had stopped eating and was giving up. The vet said he was not going to get better and nothing could be done. He was letting go. So I let him. Sorry this is so long but had to get it out there.