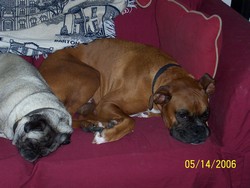 We are so thrilled to have him! It’s been terrific. We had some worries that he would not be completely housebroken but those worries were put to rest very quickly. He’s doing fine in that department and we think he’s been a good role model for Lily as well. I go home at lunchtime to let them out and he basks in the sun for about 5 minutes and then he wants back in. So far, we’ve not had any problems with him jumping the fence because he is constantly looking at the backdoor and if he thinks it’s closed, he’s right there waiting to come back inside. We usually don’t leave him outside for longer than 30 minutes and Lily is there with him the whole time and we are constantly checking on them as well. He is the sweetest dog and so playful. Lily will play for a few minutes and then ignore him, and he tries to get her to do something but she won’t. She’s so like a cat. Russ (the foster dad) warned us that he may get into the trash can b/c he was a stray for so long that he ate out of the trash. We only had one incident and he just tore a box up a little bit. I don’t think he ate any of it. It may have been due to boredom or the fact that he could get to it that tempted him.
Here are a couple of pictures of him with us and Lily.