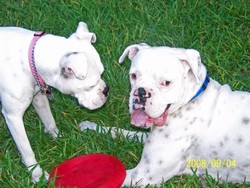 Here is a photo of Holly and Brutus. They have settled in very well, and are just now starting to do somethings on their own. Prior to this, they’ve been almost attached to my hip!

I’ve put in a dog door, which certainly makes things easier when I’m away. Although, I haven’t been through a sudden rainstorm yet!

I’ve never had two dogs before, so its interesting seeing how they operate together. Brutus always eats first, but in all other activities Holly is first. And if Brutus isn’t paying attention or allowing her her ‘perks’ she lets him know it! Generally, he waits for her to open the dog door for him, which is funny.

I have a feeling they’ve been through training before. And Holly pretty much picks up on commands Brutus follows. The lazer light has been an awesome attention-getter, and has been a very good exercise tool when I need them to be worn out!