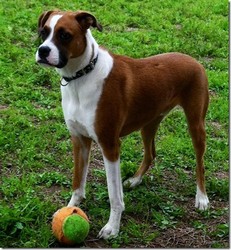 I got Bentley a little over 2 yrs ago. He was being fostered by a very nice older couple with two older boxers. When I found him on the website with all the other pups in the litter it was hard to pick just one. I was having a hard time picking between him, and one called Fiego due to the flame on his forehead, both were just very cute. I could only pick one and I picked Bentley Valentine.

This was my first boxer experience, I had just put my shepherd down due to illness and was having a hard time getting over it. Bentley not only kept me busy and entertained by his fun loving personality but he is the best snuggle dog I have ever had. I couldn’t believe it but, he even got my cat to snuggle, they lay together on the bed with me all the time.

Bentley is amazing, everywhere we go he stirs up attention and he loves it. He goes to work with me everyday and there is hardly one person that can not resist asking if they can see him, he has made many friends. And he does well with other dogs that have his same sense of playfulness. He protects the house by alerting me when he hears anyone outside, he barks and comes to me and touches me with his nose as if to say “come see, come see” I don’t know if it’s a boxer thing but he also watches tv, and gets very upset with the little white dog on the Travelers Insurance commercial. He tries to bump him with his nose. I have to wipe the screen all the time but its very funny.

I have had one issue that may just work its way out. Bentley started having tremors when he was 8 months old, he had one full seizure during that time also. But most of the tremors have subsided now. Not sure why or what happened but he seems to be outgrowing them. I am just thankful he is going to be ok, but I will always love him no matter what. It just makes him that much more special to me.

I have to say I wish I could have a house full of boxers. It is an experience I will never forget, I love this little guy a bunch. He has made me so happy.

Thank You ABR (Another Boxer Lover)