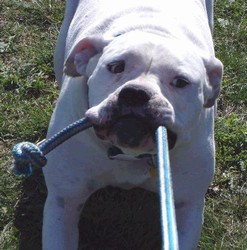 I thought that you would like to know that Andre is doing fine. He loves his dog house and has been learning quickly. He talks to us a lot more now which I think is a good thing. He understand not to knock the trash all over the kitchen floor, this was a problem, and he knows not to eat the cat’s food. He is still VERY much a puppy though. He wants to play all the time and loves to scratch his back on Charlie’s easy chair. Boy he’s gonna love it when he figures out that he can do the same thing on a tree! Him and Jay have gone rounds a couple of times, but it’s to be expected introducing a new dog into an established territory. Andre couldn’t care less, he is NEVER on the offensive, just the defense. We can’t believe how even tempered he is. Charlie and I are so glad that we picked Andre and I think that he’s very happy with us. Him and my son Wesley are not ready for each other yet, but they are getting there. Andre wants to run and play with Wes, but he knocks him down, also to be expected! It just makes Wes tough like little boys should be! Andre has a soccer ball that he has laid claim to and he loves that floppy thing. I have a video of him playing with it if you are interested in that let me know. Please pass this on to Jen as I know it was hard for her to let him go. Keep up the good work!